ProtoClassify™ models were built and tested against a standard publically available QSAR test set. Performance of the models for various targets are shown in the following graphs: 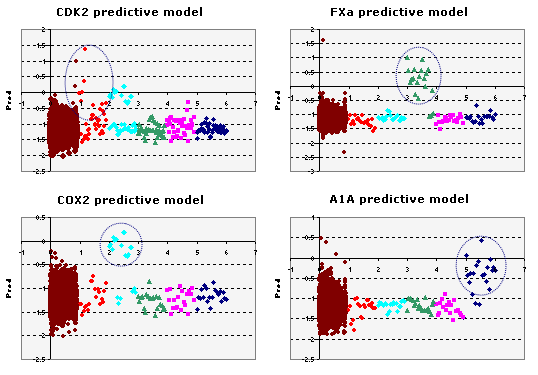 ProtoClassify™ models can be built for any target for which a number of active molecules are known.

Classification models have been pre-built for over 20 targets of current pharmaceutical interest based upon analysis of existing ligands. Some of the prebuilt models are shown in the following table.


The speed of ProtoClassify™ enables screening of very large virtual libraries (up to 100 million compounds). It is thus suitable for screening large theoretical libraries. For example, ProtoClassify™ was used to create a model using ~20 known ligands for an aminergic GPCR. A 3 million PCD library set was screened from which only 10 compounds were selected for in vitro testing based on the model scores. Of these compounds 5 were active with a best Ki of 80 nM.